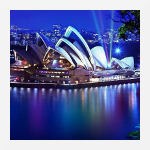 With its dazzling harbor and dreamy surf beaches, Sydney is a supermodel of a city. Throw in sun-kissed weather, seductive outdoor pools, monuments, museums, festivals, restaurants, hotels and parks, you’ve got a recipe for a perfect holiday!

If you own a restaurant, a hotel, a place to visit or a business in Sydney and you want to introduce it on Megavina.com, we invite you to register it >>>

The Sydney Opera House is a thriving hub of art, culture and history. Nearby, the Sydney Harbour Bridge is arguably the most famous of all of Sydney’s architectural gems and becomes the centrepiece of Sydney’s world famous NYE fireworks display that lights up the night sky every year.

The Sydney Opera House is situated on the Sydney Harbour at Bennelong Point and is considered by many to be one of the wonders of the modern world. Designed by Jørn Utzon and constructed under some controversy, it opened in October 1973. The Opera House is one of Sydney's most popular icons with tourists and travelers from around the world visiting, photographing and standing in awe of the cultural center of Sydney. The building's interior is not as impressionable as its exterior because it was not Utzon's work for those interested though, there is an hour opera house guided tour available $37 AUD.

The Sydney Tower is Sydney's tallest free-standing structure, the tower stands at 309 m (1,014 ft) above the Sydney CBD. It is located on Market Street, between Pitt and Castlereagh Streets. There are four sections of the tower that are open to public, three being occupied by Sydney Tower Dining. "360 Bar and Dining" (360) is a revolving restaurant space that offers some of the most spectacular sights of Sydney. On the second level is the Sydney Tower Buffet (STB) which is a contemporary self-select restaurant that has banquet-style dining, with about 40 dishes on offer. The Sydney Tower Eye takes you to the highest point above Sydney for breathtaking 360 degree views of the beautiful harbour city from the golden beaches to the distant Blue Mountains, you'll be amazed by the views.

In the summer season Bondi is a thriving cosmopolitan center for sun, surf and fun. The beach is part of a large moon shaped bay of white sands and breaking surf. It is fringed by parks and apartments that overlook the blue waters. Spanning the length of the beach, and across busy Campbell Parade, is a string of eateries, shops, hotels and tourist outlets for the souvenir hunter which bustles with activity most of the time.

Climb to the summit of the Sydney Harbor Bridge

See Sydney at its best - take the Climb of Your Life with BridgeClimb Sydney. From dawn until dusk, the view is always different. Climbs are available at dawn, by day, twilight or night.

Google has launched a new interactive feature that brings users inside the Sydney Opera House, one of the world's most iconic works of architecture