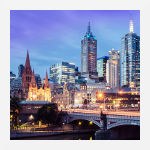 Let's explore Melbourne, Australia's hub of sport, wine, food, style and culture. Let's meet Melburnians to know where to find hidden laneways, where to dine in the best restaurants or sleep in the most comfortable hotel.

How to visit the main sightseeing in one day? Why you should visit and experience the pristine coastlines and world-class surf beaches of Phillip Island, meet the penguins...

Located on the banks of the Yarra River, near the entrance to Port Phillip Bay, Melbourne is a modern metropolis steeped in history. Melbourne is regarded as having more examples of Victorian architecture than any other city in Australia.

From wandering the hidden laneways and grand tree-lined streets to the acres of city gardens and parklands surrounding the CBD, Melbourne is vibrant, elegant, and multicultural. The city is also a dynamic food and wine scene.


What you can see in Melbourne

When Federation Square opened in 2002 to commemorate 100 years of federation, it divided Melburnians. There were those who loved it and those who hated it. Either way, it has become an integral part of the city and a great place for tourists to start their sightseeing. The ultra-modern design of open and closed spaces juxtaposes the surrounding Victorian architectural buildings. Hosting more than 2,000 events annually, tourists will always find entertainment in the central outdoor performance space and intimate indoor venues.

Located on the banks of the Yarra River, a short stroll from Flinders Street Station, this area is a culturally rich attraction for visitors. Southbank promenade is filled with indoor/outdoor cafés, restaurants, and live entertainment. An excellent arts and crafts market is held every Sunday, and the area is also home to many festivals held throughout the year. Easily recognizable by its spire, the Arts Centre incorporates a range of theaters and spaces including the State Theatre, Playhouse, Fairfax Theatre, and Hamer Hall, the premier performance space for the revered Melbourne Symphony Orchestra.

Named in recognition of The Eureka Stockade, the 1854 rebellion of prospectors in the Victorian goldfields, the tower stands 91 stories above ground. The skyscraper's gold crown and gold-plated windows add to the golden era theme and literally sparkle when the sun catches the top of the building. Skydeck, on the 88th floor, is the highest public view in any building in the southern hemisphere. Adding to the experience is The Edge, a glass cube that slides out three meters from the building for vertigo-free visitors.

Wandering the labyrinth of lane and alleyways around Flinders, Collins, and Bourke Streets is elegant, interesting, and quirky Melbourne at its best. The jewel in the crown is the magnificent Block Arcade in Collins Street. With its mosaic floor, period details, and unique shops, this is the place where late 19th-century gentry promenaded, coining the phrase, "doing the block".

A short tram ride from the CBD, the Melbourne Museum is surrounded by beautiful gardens and parkland. This modern purpose-built museum houses a diverse collection depicting society and cultures. Highlights include the Aboriginal Centre, Bunjilaka, the children's museum, and The Blue Box a cube protruding off the side of the building.

Although the 22 hectares of Melbourne Zoo dates back to 1862, the 320 species of animals have the best of modern facilities in state-of-the-art enclosures. The award-winning Trail of the Elephants is an insight into the lives of the resident Asian elephants in a traditional village-garden setting. Another highlight is the Orang-utan Sanctuary where the animals live in their treetop home.

A popular place with locals and tourists, this historic icon has been at the center of fresh produce shopping since 1878. In addition to the magnificent food halls, market stalls sell everything from clothing, art, and toys to that hard-to-find unique souvenir, five days a week. Tours are available, and special events such as night markets, music concerts, and other functions are often held during summer.

Established during the Gold Rush, Chinatown was a business and residential refuge for Chinese prospectors who suffered prejudice from hostile European immigrants. Today, under the brightly decorated marble arches, the area buzzes with restaurants and cafés. Embraced by Melburnians, Chinatown is a popular lunch spot on Sundays when queues for Yum Cha extend out into the street. The Flower Drum is considered one of Australia's best restaurants. Spectacular Chinese New Year festivities are in the main street of Chinatown every year.

Visitors come to Phillip Island for its swimming and surf beaches, unique wildlife and the famous penguins which make their epic journey along the beach at sunset. Major racing events are held at the island's Grand Prix Circuit include the Australian Motorcycle Grand Prix and Superbike World Championship.